The Mysterious Death of Osama bin Laden: Creating Evidence Where There Is None 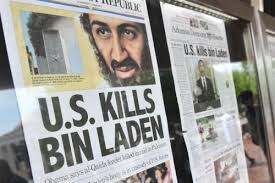 The New Yorker has published a story planted on Nicholas Schmidle by unidentified sources who claim to be familiar with the alleged operation that murdered Osama bin Laden.

There is no useful information in the story. Its purpose seems simply to explain away or cover up holes in the original story, principally why did the Seals murder an unarmed, unresisting Osama bin Laden whose capture would have resulted in a goldmine of terrorist information and whose show trial would have rescued the government’s crumbling 9/11 story?

The gullible Schmidle tells us: “‘There was never any question of detaining or capturing him–it wasn’t a split-second decision. No one wanted detainees,’ the special-operations officer told me.” In other words, the SEALs murdered bin Laden, because the US government did not want detainees, not because trigger-happy stupid SEALs destroyed a font of terrorist information.

Why did the SEALS dump bin Laden’s body in the ocean instead of producing the evidence to a skeptical world?

No real explanation, just that SEALS had done the same thing to other victims. Schmidle writes: “All along, the SEALs had planned to dump bin Laden’s corpse into the sea–a blunt way of ending the bin Laden myth.” But before they did so, the US checked with an unidentified Saudi intelligence operative, who allegedly replied, “Your plan sounds like a good one.”

After all of Sy Hersh’s New Yorker revelations of US government lies and plots, one can understand the pressure that might have been applied to the New Yorker to publish this fairy tale. But what is extraordinary is that there was a real story that Schmidle and the New Yorker could have investigated.

In the immediate aftermath of bin Laden’s alleged murder by the SEALs, Pakistani TV interviewed the next door neighbor to bin Laden’s alleged compound. Someone supplied the video with an English translation running at the bottom of the video. According to the translation, the next door neighbor, Mr. Bashir, said that he watched the entire operation from the roof of his house. There were 3 helicopters. Only 1 landed. About a dozen men got out and entered the house. They shortly returned and boarded the helicopter. When the helicopter lifted off it exploded, killing all aboard. Mr. Bashir reports seeing bodies and pieces of bodies all over.

The US government acknowledges that it lost a helicopter, but claims no one was hurt. Obviously, as there were no further landings, if everyone was killed as Mr. Bashir reports, there was no body to be dumped into the ocean.

Surely there is a qualified interpreter who can tell us what Mr. Bashir is saying. If the English translation that I saw is not a hoax, then we are presented with a story totally different from the one the government told us and repeated again through Mr. Schmidle.

If the English translation of Mr. Bashir’s interview is correct, one would think that there would be some interest on the part of US news organizations and on the part of the intelligence committees in Congress to question Mr. Bashir and his neighbors, many of whom are also interviewed on Pakistani TV saying that they have lived in Abbottabad all their lives and are absolutely certain that Osama bin Laden was not among them.

Mr. Schmidle goes to lengths to describe the SEALs’ weapons, although his story makes it clear that no weapons were needed as bin Laden is described as “unarmed” and undefended. The “startled” bin Laden didn’t even hear the helicopters or all the SEALs coming up the stairs. In addition to all his fatal illnesses which most experts believe killed him a decade ago, bin Laden must have been deaf as neighbors report that the sound of the helicopters was “intense.”

When Pakistanis on the scene in Abbottabad report a totally different story from the one that reaches us second and third hand from unidentified operatives speaking to reporters in the US who have never been to Abbottabad, shouldn’t someone qualified look into the story?

Paul Craig Roberts, a former Assistant Secretary of the US Treasury and former associate editor of the Wall Street Journal, has been reporting shocking cases of prosecutorial abuse for two decades. A new edition of his book, The Tyranny of Good Intentions, co-authored with Lawrence Stratton, a documented account of how Americans lost the protection of law, has been released by Random House.