The U.S. Is Already Attacking Iran Through Terrorist Proxies

Tehran’s contention that the United States is carrying out terror attacks inside Iran in an effort to destabilize the Ahmadinejad regime in preparation for a military assault was largely ignored by the establishment media, but it’s an admitted fact that the CIA uses terrorist proxies to do precisely that. 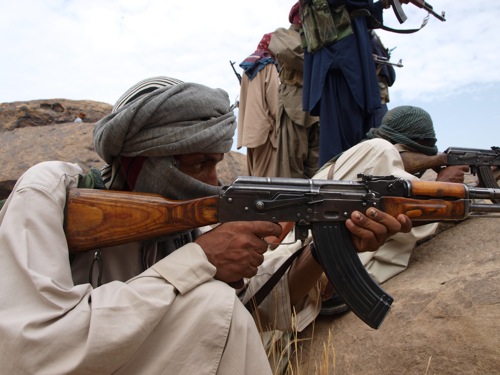 “Iran has irrefutable evidence that exposes the official involvement of the United States government in anti-Iran planning and the dispatching of elements to conduct acts of sabotage and terror in Iran and other regional countries,” secretary of Iran’s Supreme National Security Council Saeed Jalili said last week, promising to send evidence of “US state-sponsored terrorism” to the United Nations

“We possess one hundred pieces of irrefutable evidence that reveal the US role in directing terrorists for conducting acts of terror in Iran and the region,” Supreme Leader of the Islamic Revolution Ayatollah Seyed Ali Khamenei added.

Because the story was reported by Iranian state media, the western press received it with a collective shrug of the shoulders. The new IEAE report claiming Iran was on the verge of developing a nuclear weapon was afforded about a thousand times more coverage.

However, the fact that the United States is training and bankrolling terrorist groups to destabilize Iran through violence and other acts of subversion is admitted.

As former CIA veteran Robert Baer explained in the documentary Vanguard: America’s Secret War With Iran, the U.S. has been at war with Iran through its terrorist proxies for years, notably the Kurdish militant nationalist group PJAK, which has been blamed for numerous attacks in Iran.

As the London Telegraph, ABC News and numerous other mainstream outlets reported back in 2007, the U.S. is also using the Al-Qaeda affiliated Sunni terrorist group Jundullah to carry out suicide bombings and other destabilization attacks in Iran, a policy crafted by the Bush administration which has been continued under Obama.

“President George W Bush has given the CIA approval to launch covert “black” operations to achieve regime change in Iran, intelligence sources have revealed. Mr Bush has signed an official document endorsing CIA plans for a propaganda and disinformation campaign intended to destabilize, and eventually topple, the theocratic rule of the mullahs,” reported Telegraph.

Part of that destabilization campaign involved the the CIA “Giving arms-length support, supplying money and weapons, to an Iranian militant group, Jundullah, which has conducted raids into Iran from bases in Pakistan,” stated the report.

Jundullah is a Sunni Al-Qaeda offshoot organization that was formerly headed by alleged 9/11 mastermind Khalid Sheikh Mohammed. In October 2009, Jundullah attacked the Iranian Revolutionary Guard at their headquarters in Pishin, near the border with Pakistan, killing 40 people.

The group has been blamed for a number of bombings inside Iran aimed at destabilizing Ahmadinejad’s government and is also active in Pakistan, having been fingered for its involvement in attacks on police stations and car bombings at the Pakistan-US Cultural Center in 2004.

In May 2008, ABC News reported on how Pakistan was threatening to turn over six members of Jundullah to Iran after they were taken into custody by Pakistani authorities.

“U.S. officials tell ABC News U.S. intelligence officers frequently meet and advise Jundullah leaders, and current and former intelligence officers are working to prevent the men from being sent to Iran,” reported ABC news, highlighting again the close relationship between the terror group and the CIA.

In July 2009, a Jundullah member admitted before a court in Zahedan Iran that the group was a proxy for the U.S. and Israel.

Abdolhamid Rigi, a senior member of the group and the brother of the group’s leader Abdolmalek Rigi, who was one of the six members of the organization extradited by Pakistan, told the court that Jundullah was being trained and financed by “the US and Zionists”. He also said that the group had been ordered by America and Israel to step up their attacks in Iran.

Jundullah is not the only anti-Iranian terror group that US government has been accused of funding in an attempt to pressure the Iranian government.

Multiple credible individuals including US intelligence whistleblowers and former military personnel have asserted that the U.S. is conducting covert military operations inside Iran using guerilla groups to carry out attacks on Iranian Revolution Guard units.

It is widely suspected that the well known right-wing terrorist organization known as Mujahedeen-e Khalq (MEK), once run by Saddam Hussein’s dreaded intelligence services, is now working exclusively for the CIA’s Directorate of Operations and carrying out remote bombings in Iran.

After a bombing inside Iran in March 2007, the London Telegraph also reported on how a high ranking CIA official blew the whistle on the fact that America is secretly funding terrorist groups in Iran in an attempt to pile pressure on the Islamic regime to give up its nuclear program.

A story entitled, US funds terror groups to sow chaos in Iran, reveals how funding for the attacks carried out by the terrorist groups “comes directly from the CIA’s classified budget,” a fact that is now “no great secret”, according to a former high-ranking CIA official in Washington who spoke anonymously to The Sunday Telegraph.