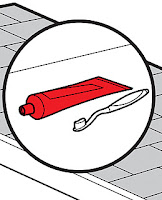 A report from TIME.com lists among other household Items – Flouride- as an “Environmental Toxin”. The article starts out, saying:
Chemicals in plastics and other products seem harmless, but mounting evidence links them to health problems — and Washington lacks the power to protect us

Of course, activists and scientists have for years been aware of Flouride’s toxicity, but propaganda and Big Pharma have sought to keep these facts from the general public by showing flouride in a favorable light through the controlled media.

The article went on to say that “Government studies support current fluoride levels in tap water, but studies on long-term exposure and cancers are ongoing”.

What It Is: A form of the basic element fluorine

Health Hazards: Neurotoxic and potentially tumorigenic if swallowed; the American Dental Association advises that children under 2 not use fluoride toothpaste

What You Should Know: Government studies support current fluoride levels in tap water, but studies on long-term exposure and cancers are ongoing

So, What are the lethal levels for humans?

As of April 7, 1997, the United States FDA (Food & Drug Administration) required that all fluoride toothpastes sold in the U.S. carry the following poison warning:

WARNING: Keep out of reach of children under 6 years of age. If you accidentally swallow more than used for brushing, seek professional help or contact a poison control center immediately.

Potentially fatal dose = 5 mg of fluoride per kg of bodyweight.

In 1986 the United States Environmental Protection Agency (EPA) established a maximum contaminant level (MCL) for fluoride at a concentration of 4 milligrams per litre (mg/L), which is the legal limit of natural fluoride allowed in the water. In 2006, a 12-person committee of the US National Research Council (NRC) reviewed the health risks associated with fluoride consumption[12] and unanimously concluded that the maximum contaminant level of 4 mg/L should be lowered. The EPA has yet to act on the NRC’s recommendation.[13][14] The limit was previously 1.4 – 2.4 mg/L, but it was raised to 4 mg/L in 1985.[15]
Wikipedia

Excessive flouride consumption in studies has been shown to be the culprit in the following;

While it is refreshing to see the truth about flouride being published in the mainstream media, it is disappointing to see, that when most people are told about the devastating effects of flouride in our drinking water, toothpaste, and other household items – they ignore the facts, or even categorize these facts as just another “Conspiracy theory”.