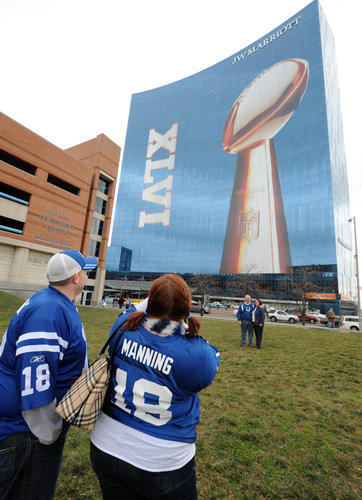 Despite acknowledging there are “no credible or specific threats” to the safety of the 2012 Super Bowl in Indianapolis on Sunday, the TSA is training thousands of fast food sellers and other vendors to spot terrorists under the “First Observer” program.

As we have previously reported, many of the behaviors characterized as potential signs of terrorism by the TSA in its training procedures are mundane activities performed by a majority of people, including using a video camera, talking to police officers, wearing hoodies, driving vans, writing on a piece of paper, and using a cell phone recording application.

The First Observer program has previously been used by the TSA on America’s highways, most recently in Tennessee for the purpose of “bothering truck drivers and passengers by subjecting their cargoes to exhaustive searches,” as former Congressman Bob Barr wrote back in November.

Drivers were also recruited to become snitches under the auspices of “See Something, Say Something,” as VIPR teams (Visible Intermodal Prevention and Response) worked with the Tennessee Highway Patrol to oversee a process that has been criticized as an alarming sign of internal checkpoints becoming commonplace in America.

With Congress having recently given the green light to increase their funding, VIPR teams, who conducted over 9300 unannounced checkpoints last year alone, will also be very much in evidence at the Super Bowl this weekend.

VIPR’s presence at the big game again illustrates the expanding scope of the deployment, under which TSA agents have been tasked with shaking down Americans at everywhere from bus depots, to ferry terminals, to train stations, in one instance conducting pat downs of passengers, including children, who had already completed their journey when arriving in Savannah.

The TSA yesterday denied a report out of WPRI that full body scanners would be used on fans entering the stadium, but reiterated that they would be in use at the nearby airport and also made reference to other “security issues” being coordinated with stadium venue security and local law enforcement.

Fans attending the game will be subject to a full body pat down and have been warned that most items being brought into the Lucas Oil Stadium will be confiscated.