Turkish sources and media revealed a document which shows that a death list had been prepared in advance by the Israelis, showing names and pictures of people on board of the ships to be murdered, who, according to Israel, were “involved in the International humanitarian aid for Gaza”. According to the Turkish sources, hundreds of Israeli soldiers stormed the blue Turkish ship “Marmara” flotilla and they had copies of the death list. The list included the names of civilians on the fleet who should be killed”. The document was apparently recovered after one of the Israeli soldiers lost it during the piracy act.

Flotilla Massacre is a Reply to the Turkish-Iranian Relations 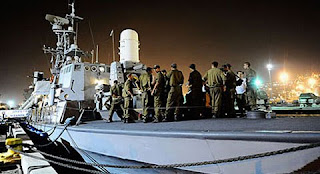 Deck of an israeli gun boat.

The leaders of the Israeli gang of War criminals, the so-called “Israeli government” is currently engaged in inciting and planning to launch a nuclear war against Iran, was not able to do anything in response to the Turkish- Iranian-Brazilian agreement of last May 17 2010 to transfer 1.200 Kg of low-enriched uranium to Turkey in return for nuclear fuel. In retaliation, they perpetrated the massacre on the Freedom Flotilla of humanitarian aid-carrying ships aiming to break the Israel genocide of siege on Gaza imposed since 2006. The Turkish-Iranian-Brazilian agreement stood as an obstacle against the Israeli ambitions to force the world to enter into a spiral of bloody nuclear war. It is wrong to believe that the Turkish government was not expecting the massacre against the Freedom Flotilla which carried 10.000 tonnes of humanitarian aid to Gaza. 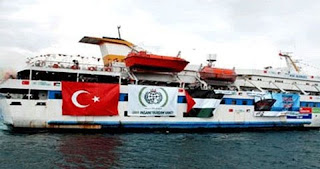 The military maritime piracy and massacre operation carried out by Shayetet 13, a naval commando unit, in which at least 20 peace activists were murdered and over 50 were wounded, was a decision of the inner circles of power in israel and approved by the Israeli Cabinet headed by Benjamin Netanyahu, Ehud Barak and other war criminals. This Israeli massacre was a message addressed to Turkey and its new Iranian and Syrian allies. Anyone who knows to read between the lines and the history of Israel’s military leaders can understand that Israel has never distinguished between civilians and militants of the groups which are considered as enemies according to the non-logical standards of the zionists. 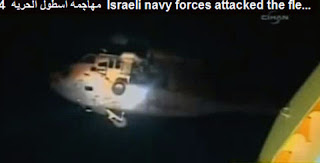 Israel committed a massacre against the Turkish ship “Marmara”, which carried humanitarian aid to the Palestinians besieged in the Gaza concentration camp. This massacre was well prepared by the Israeli cabinet, and some pro-Israel governments were informed with full details about the planned crime. Israel commissioned a special unit in the Marine Corps, deployed boats and helicopters patrolling the coast of Ashdod and Gaza and announced the waters off the coast of Gaza a closed military zone. They also announced via their propaganda organs of their intent to transfer the ships and the solidarity activists to the port of Ashdod before deporting them to their countries as illegal immigrants, and to arrest those who refused to identify themselves and sign a pledge not to return. They also prepared tents as detention units to jailing the activists and investigating them; the team of the interrogators which Israel choose to interrogate the peace activist was manned by people with experience as torturers and who had previously “worked” the Palestinian prisoners of the israeli gulag. 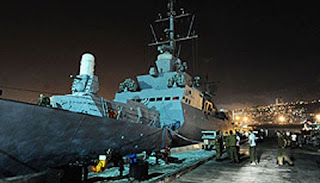 The Israeli ships monitored the Freedom Flotilla from a distance of about 124 km away of the coast of Israel. According to the international movement, the passengers rushed to wear the safe jackets and raised the alert status as soon as the war ships were visible. The peace activists on board of the convoy stated that three Israeli ships spoke to the Turkish ship Captain over radio and warned him of the consequences of approaching the coast of Gaza which was declared as the a closed military area. They demanded from them to bring the humanitarian aid to the port of Ashdod, stressing that the Israeli navy would prevent the penetration a military closed area at any price, meaning that they would not shrink from murdering anybody.

The ships were carrying 10.000 tons of medical supplies and building materials, timber, and 100 pre-built houses, for ten thousands of people who lost their homes due to the Israeli war crimes on Gaza early in the year of 2009. They also carried 500 electric vehicles for the use of disabled people, especially since the recent Israeli war crimes over 600 were left permanently disabled, with amputated legs.

The Israeli Arab Knesset MP Hanan Al-Zoubi had spoken through a loudspeaker in Hebrew with the Israeli military telling them to not attack ships carrying civilian peace activists and humanitarian aid. She added that during her appeal the Israeli soldiers fired live bullets at ships, which led to the wounding of civilians, among them the Arab-Israeli citizen Sheikh Raed Salah, who was shot and now in a critical conditions. She added: “the Israeli gunboats approached the “Caravan of freedom” and asked the captain of the ship to identify himself and the identity of the boat. The ships were in the International waters about 100 miles from Gaza. At this moment the Israeli helicopters attacked the ships from the sky.

Turkish sources and media revealed a document which shows that a death list had been prepared in advance by the Israelis, showing names and pictures of people on board of the ships to be murdered, who, according to Israel, were “involved in the International humanitarian aid for Gaza”. According to the Turkish sources, hundreds of Israeli soldiers stormed the blue Turkish ship “Marmara” flotilla and they had copies of the death list. The list included the names of civilians on the fleet who should be killed”. The document was apparently recovered after one of the Israeli soldiers lost it during the piracy act.

Regarding the complicity of other foreign states in this crime, it has transcended that the Germans Parliamentarians who were on-board, Annette Groth, Inge Höger and Norman Paech, had repeatedly asked the German Foreign Ministry for support and protection, but were rebuffed and instead they were warned to get off the flotilla because of unspecified “dangers”. The strange attitude of Cyprus, which neither allowed the ships to enter port, nor allowed a delegation of Parliamentarians to board the ships, can in retrospect only be explained with the prior knowledge and complicity in the crime if the Cypriot regime.

In the end, Israel has carried out a horrific bloody massacre, and the victims were all civilians.The questions remain: Did Israel achieve its goals with the massacre on the Freedom Flotilla ship? Did Turkey and the other countries on Israel secret hate list (who are listed in secret as “hostile enemies”) receive the Israeli message? Which was the Israeli message? The answer to the first question is a clear now, and the coming days will reveal the answer to the second question and whether Israel really considers Turkey an enemy in secret. Whatever the answers to these questions, Israel should admit that the political equation has changed in the region and Israel and its allies can no longer change the politics.

In the best interest of everybody, Israel should understand that everything they do is against them and that it would be better to desist from further criminal actions. Also in the best interest of everybody, all other nations must understand that Israel no longer has any legitimacy whatsoever as a state, and that its continued existence as a state is undesirable in the extreme to everybody outside of the tiny corrupt elites which are its support base overseas.