US Department of Imperial Expansion

Deeper down the rabbit hole of US-backed color revolutions.

Believe it or not, the US State Department’s mission statement actually says the following:

“Advance freedom for the benefit of the American people and the international community by helping to build and sustain a more democratic, secure, and prosperous world composed of well-governed states that respond to the needs of their people, reduce widespread poverty, and act responsibly within the international system.”

A far and treasonous cry from the original purpose of the State Department – which was to maintain communications and formal relations with foreign countries – and a radical departure from historical norms that have defined foreign ministries throughout the world, it could just as well now be called the “Department of Imperial Expansion.” Because indeed, that is its primary purpose now, the expansion of Anglo-American corporate hegemony worldwide under the guise of “democracy” and “human rights.” That a US government department should state its goal as to build a world of “well-governed states” within the “international system” betrays not only America’s sovereignty but the sovereignty of all nations entangled by this offensive mission statement and its execution.

The illegitimacy of the current US State Department fits in well with the overall Constitution-circumventing empire that the American Republic has degenerated into. The current Secretary of State, Hillary Clinton, gives a daily affirmation of this illegitimacy every time she bellies up to the podium and further makes a mockery of America, its people and its destiny.

Recently she issued a dangerously irresponsible “warning” to Venezuela and Bolivia regarding their stately relations with Iran. While America has to right to mediate its own associations with foreign nations, one is confounded trying to understand what gives America the right to dictate such associations to other sovereign nations. Of course, the self-declared imperial mandate the US State Department bestowed upon itself brings such “warnings” into perspective with the realization that the globalists view no nation as sovereign and all nations beholden to their unipolar “international system.” 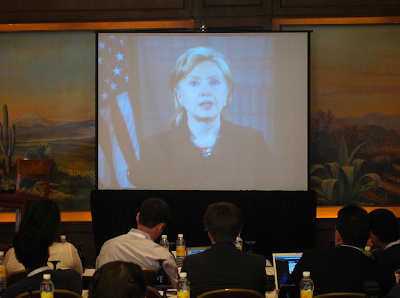 It’s hard to deny the US State Department is not behind the
“color revolutions” sweeping the world when the Secretary of
State herself phones in during the youth movement confabs
her department sponsors on a yearly basis.

If only the US State Department’s meddling was confined to feckless secretaries squawking behind podiums attempting to fulfill ridiculous mission statements, we could all rest easier. However, the US State Department actively bolsters its meddling rhetoric with very real measures. The centerpiece of this meddling is the vast and ever-expanding network being built to recruit, train, and support various “color revolutions” worldwide. While the corporate owned media attempts to portray the various revolutions consuming Eastern Europe, Southeast Asia, and now Northern Africa and the Middle East as indigenous, spontaneous, and organic, the reality is that these protesters represent what may be considered a “fifth-branch” of US power projection. 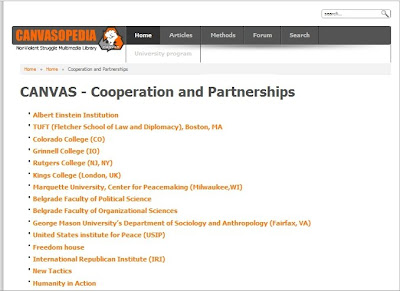 As with the army and CIA that fulfilled this role before, the US State Department’s “fifth-branch” runs a recruiting and coordinating center known as the Alliance of Youth Movements (AYM). Hardly a secretive operation, its website, Movements.org proudly lists the details of its annual summits which began in 2008 and featured astro-turf cannon fodder from Venezuela to Iran, and even the April 6 Youth Movement from Egypt. The summits, activities, and coordination AYM provides is but a nexus. Other training arms include the US created and funded CANVAS of Serbia, which in turn trained color-coup leaders from the Ukraine and Georgia, to Tunisia and Egypt, including the previously mentioned April 6 Movement. There is also the Albert Einstein Institute which produced the very curriculum and techniques employed by CANVAS.

As previously noted, these organizations are now retroactively trying to obfuscate their connections to the State Department and the Fortune 500 corporations that use them to achieve their goals of expansion overseas. CANVAS has renamed and moved their list of supporters and partners while AYM has oafishly changed their “partnerships” to “past partnerships.” 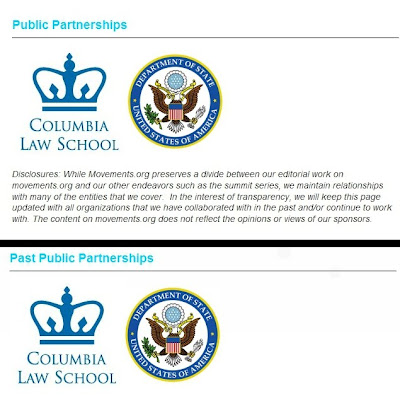 Before & After: Oafish attempts to downplay US State Department’s extra-legal
meddling and subterfuge in foreign affairs. Other attempts are covered here.

Funding all of this is the tax payers’ money funneled through the National Endowment for Democracy (NED), the International Republican Institute (IRI), the National Democratic Institute (NDI), and Freedom House. George Soros’ Open Society foundation also promotes various NGOs which in turn support the revolutionary rabble on the ground. In Egypt, after the State Department’s youth brigades played their role, Soros and NED funded NGOs began work on drafting Egypt’s new constitution.

It should be noted that while George Soros is portrayed as being “left,” and the overall function of these pro-democracy, pro-human rights organizations appears to be “left-leaning,” a vast number of notorious “Neo-Cons” also constitute the commanding ranks and determine the overall agenda of this color revolution army.

Then there are legislative acts of Congress that overtly fund the subversive objectives of the US State Department. In support of regime change in Iran, the Iran Freedom and Support Act was passed in 2006. More recently in 2011, to see the US-staged color revolution in Egypt through to the end, money was appropriated to “support” favored Egyptian opposition groups ahead of national elections.

Then of course there is the State Department’s propaganda machines. While organizations like NED and Freedom House produce volumes of talking points in support for their various on-going operations, the specific outlets currently used by the State Department fall under the Broadcasting Board of Governors (BBG). They include Voice of America, Radio Free Europe, Radio Free Asia, Alhurra, and Radio Sawa. Interestingly enough, the current Secretary of State Hillary Clinton sits on the board of governors herself, along side a shameful collection of representatives from the Fortune 500, the corporate owned media, and various agencies within the US government. 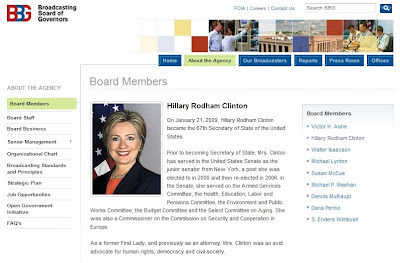 Judging from Radio Free Europe’s latest headlines, such as “Lieberman: The West’s Policy Toward Belarus Has ‘Failed Miserably’ ” and “Azerbaijani Youth Activist ‘Jailed For One Month,’” it appears that hope is still pinned on inciting color revolutions in Belarus and Azerbaijan to continue on with NATO’s creep and the encirclement of Russia. Belarus in particular was recently one of the subjects covered at the Globsec 2011 conference, where it was considered a threat to both the EU and NATO, having turned down NATO in favor of closer ties with Moscow.

Getting back to Hillary Clinton’s illegitimate threat regarding Venezuela’s associations with Iran, no one should be surprised to find out an extensive effort to foment a color revolution to oust Hugo Chavez has been long underway by AYM, Freedom House, NED, and the rest of this “fifth-branch” of globalist power projection. In fact, Hugo Chavez had already weathered an attempted military coup overtly orchestrated by the United States under Bush in 2002.

Upon digging into the characters behind Chavez’ ousting in 2002, it
appears that this documentary sorely understates US involvement.

The same forces of corporatism, privatization, and free-trade that led the 2002 coup against Chavez are trying to gain ground once again. Under the leadership of Harvard trained globalist minion Leopoldo Lopez, witless youth are taking the place of 2002’s generals and tank columns in an attempt to match globalist minion Mohamed ElBaradei’s success in Egypt.

Unsurprisingly, the US State Department’s AYM is pro-Venezuelan opposition, and describes in great detail their campaign to “educate” the youth and get them politically active. Dismayed by Chavez’ moves to consolidate his power and strangely repulsed by his “rule by decree,” -something that Washington itself has set the standard for- AYM laments over the difficulties their meddling “civil society” faces.

Chavez’ government recognized the US State Department’s meddling recently in regards to a student hunger strike and the US’s insistence that the Inter-American Human Rights Commission be allowed to “inspect” alleged violations under the Chavez government. Venezuelan Foreign Minister Nicolás Maduro even went as far as saying, “It looks like they (U.S.) want to start a virtual Egypt.” 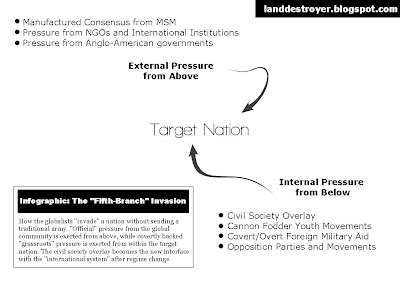 Understanding this “fifth-branch” invasion of astro-turf cannon fodder and the role it is playing in overturning foreign governments and despoiling nation sovereignty on a global scale is an essential step in ceasing the Anglo-American imperial machine. And of course, as always, boycotting and replacing the corporations behind the creation and expansion of these color-revolutions hinders not only the spread of their empire overseas, but releases the stranglehold of dominion they possess at home in the United States. Perhaps then the US State Department can once again go back to representing the American Republic and its people to the rest of the world as a responsible nation that respects real human rights and sovereignty both at home and abroad.

Tony Cartalucci is the editor and writer at Land Destroyer