US Sends Four Anti-Mine Ships To Strait of Hormuz

With the USS Enterprise on its way to bring the number of US aircraft carriers located in the Persian Gulf up to three, the Navy has announced it will send four additional mine countermeasure ships to the Strait of Hormuz as tensions with Iran rise. 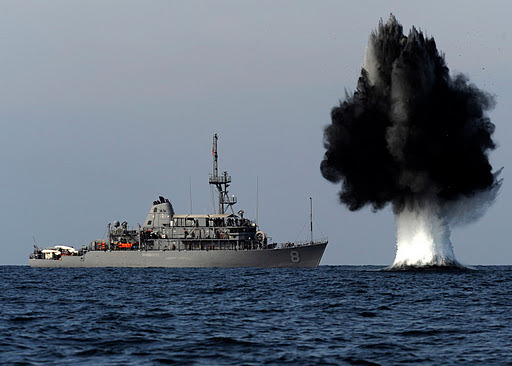 “Four additional mine countermeasure ships are being dispatched to the region in addition to further airborne mine countermeasure helicopters, Chief of Naval Operations Adm. Jonathan Greenert told the Senate Armed Services Committee during a Navy budget hearing Thursday,” reports Stars and Stripes.

No date has been set for the deployment of the ships, but they will join the USS Enterprise, currently on its way to the Fifth Fleet area of operations, along with the USS Carl Vinson and the USS Abraham Lincoln, both of which are already patrolling the Strait of Hormuz.

“I came to the conclusion we could do better setting the theater,” Greenert told the committee while recounting a recent trip through the waterway on the USS John C. Stennis, which was under the watchful eye of Iranian naval vessels. “I wanted to be sure … that we are ready, that our folks are proficient, they’re confident, and they’re good at what they do in case called upon.”

The deployment of the anti-mine ships follows a warning by US intelligence at the end of December that Iran’s Revolutionary Guards were preparing Iranian marine commandos to place mines along the strategic oil choke point.

While a temporary closure of the Strait would send oil prices soaring, analysts believe the US has the capability to clear the waterway of mines within a 24-48 hour period, meaning crude supplies would not be significantly disrupted.

However, yesterday’s news that that the United States and the UK are preparing to release emergency oil stocks within months has led to speculation that the decision on attacking Iran before the end of summer has already been green lighted.

As the US lines up its military hardware in the Persian Gulf, political pressure has also intensified.

According to Russian sources, Hillary Clinton recently demanded that Russia send a warning to Iran that upcoming 6 nation talks represent the “last chance” for a diplomatic solution before war plans are activated.

Economic pressure is also building to a crescendo, with Iran set to be eliminated from the SWIFT global financial transaction service this weekend, a move that makes it impossible for Tehran to conduct international trade via conventional methods. Iran’s economy has been under sustained attack for months, with western sanctions largely responsible for a 10-year low in oil production.

According to reports out of Israel, Prime Minister Benjamin Netanyahu has now for the first time secured a majority of votes in the cabinet to go to war with Iran.

In an attempt to combat sentiment in Israel which is largely hostile to a strike on Iran, Netanyahu is now preoccupied with “preparing public opinion for war against Iran,” according to Haaretz editor-in-chief Aluf Benn.