Did no one notice that he built a HUGE FRESH WATER PIPELINE to the Benghazi region, that lunatic?
Were they waiting for him to finish? 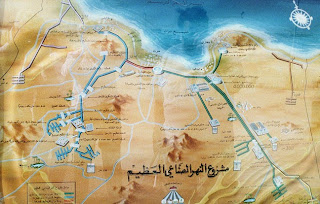 The 1st of September marks the anniversary of the opening of the major stage of Libya’s Great Man-Made River Project. This incredibly huge and successful water scheme isvirtually unknown in the West, yet it rivals and even surpasses all our greatest development projects. The leader of the so-called advanced countries, the United States of America cannot bring itself to acknowledge Libya’s Great Man-Made River. The West refuses to recognize that a small country, with a population no more than four million, can construct anything so large without borrowing a single cent from the international banks.

…In the 1960s during oil exploration deep in the southern Libyan desert, vast reservoirs of high quality water were discovered in the form of aquifers. …

…In Libya there are four major underground basins, these being the Kufra basin, the Sirt basin, the Morzuk basin and the Hamada basin, the first three of which contain combined reserves of 35,000 cubic kilometres of water. These vast reserves offer almost unlimited amounts of water for the Libyan people.

The people of Libya under the guidance of their leader, Colonel Muammar Al Qadhafi, initiated a series of scientific studies on the possibility of accessing this vast ocean of fresh water. Early consideration was given to developing new agricultural projects close to the sources of the water, in the desert. However, it was realized that on the scale required to provide products for self sufficiency, a very large infrastructure organization would be required. In addition to this, a major redistribution of the population from the coastal belt would be necessary. The alternative was to ‘bring the water to the people’.

In October 1983, the Great Man-made River Authority was created and invested with the responsibility of taking water from the aquifers in the south, and conveying it by the most economical and practical means for use, predominantly for irrigation, in the Libyan coastal belt.

By 1996 the Great Man-Made River Project had reached one of its final stages, the gushing forth of sweet unpolluted water to the homes and gardens of the citizens of Libya’s capital Tripoli. Louis Farrakhan, who took part in the opening ceremony of this important stage of the project, described the Great Man-Made River as “another miracle in the desert.” Speaking at the inauguration ceremony to an audience that included Libyans and many foreign guests, Col. Qadhafi said the project “was the biggest answer to America… who accuse us of being concerned with terrorism.”

The Great Man-Made River, as the largest water transport project ever undertaken, has been described as the “eighth wonder of the world”. It carries more than five million cubic metres of water per day across the desert to coastal areas, vastly increasing the amount of arable land. The total cost of the huge project is expected to exceed $25 billion (US).

Consisting of a network of pipes buried underground to eliminate evaporation, four meters in diameter, the project extends for four thousand kilometres far deep into the desert. All material is locally engineered and manufactured. Underground water is pumped from 270 wells hundreds of meters deep into reservoirs that feed the network. The cost of one cubic meter of water equals 35 cents. The cubic meter of desalinized water is $3.75. Scientists estimate the amount of water to be equivalent to the flow of 200 years of water in the Nile River.

The goal of the Libyan Arab people, embodied in the Great Man-Made River project, is to make Libya a source of agricultural abundance, capable of producing adequate food and water to supply its own needs and to share with neighboring countries. In short, the River is literally Libya’s ‘meal ticket’ to self-sufficiency.

Self-sufficiency?!? Absolutely Not Allowed. Banksters don’t like that sort of thing one bit.

This project has been in the works for many years. Have you ever heard of it? We had not until today.

A gala ceremony was held in Libya at the end of August, at which Libyan leaders “turned on the tap” of the Great Man-Made River, the water pipeline/viaduct project designed to bring millions of liters of water from beneath the Sahara Desert, northward to the Benghazi region on the Mediterranean coast. The inauguration marked the end of Phase I of the project, which is slated for completion in 1996.

Under the giant scheme, water is pumped from aquifers under the Sahara in the southern part of the country, where underground water resources extend into Egypt and Sudan. Then the water is transported by reinforced concrete pipeline to northern destinations. Construction on the first phase started in 1984, and cost about $5 billion. The completed project may total $25 billion. South Korean construction experts built the huge pipes in Libya by some of the most modern techniques. The engineering feat involves collecting water from 270 wells in east central Libya, and transporting it through about 2,000 kilometers of pipeline to Benghazi and Sirte. The new “river” brings 2 million cubic meters of water a day. At completion, the system will involve 4,000 kilometers of pipepines, and two aqueducts of some 1,000 kilometers. Joining in celebrating the inauguration of the artificial river were dozens of Arab and African heads of state and hundreds of other foreign diplomats and delegations. Among them were Egyptian President Hosni Mubarak,King Hassan of Morocco, the head of Sudan, Gen. Omar El Beshir, and Djibouti’s President Hassan Julied.

Col. Muammar Qaddafi told the celebrants: “After this achievement, American threats against Libya will double…. The United States will make excuses, [but] the real reason is to stop this achievement, to keep the people of Libya oppressed.” Qaddafi presented the project to the cheering crowd as a gift to the Third World.

Mubarak spoke at the ceremony and stressed the regional importance of the project. Qaddafi has called on Egyptian farmers to come and work in Libya, where there are only 4 million inhabitants. Egypt’s population of 55 million is crowded in narrow bands along the Nile River and delta region. Over the last 20 years, the water improvement projects envisioned for Egypt, which could provide more water and more hectares of agricultural and residential land, have been repeatedly sabotaged by the International Monetary Fund and World Bank, and the Anglo-American financial interests behind them.

In the 1970s, Qaddafi expelled many Egyptian families from Libya, but over the recent months the two countries have become close once again. There are plans to build a railway line to facilitate travel back and forth. There is also a standing commission between Sudan and Libya for integrating economic activity.

Over 95% of Libya is desert, and the new water sources can open up thousands of hectares of irrigated farmland. At present over 80% of the country’s agriculture production comes from the coastal regions, where local aquifers have been overpumped, and salt water intrusion is taking place. The Great Man-Made River will relieve this. The water now flowing will immediately supplement supplies for domestic and industrial needs in Benghazi and Sirte. But Libyan officials plan for 80% of the overall project’s flow to eventually be used for irrigating old farms, and reclaiming some desert lands. Since 20% of Libya’s imports are foodstuffs, expanded water supplies are a means to greater self-sufficiency. The Great Man-Made River project and its objectives fly in the face of the water-control schemes sanctioned by the World Bank and the International Monetary Fund. These institutions have blocked work on other “great projects” such as the Jonglei Canal–the huge ditch that was designed as a straight channel on the upper White Nile in southern Sudan. The Jonglei Canal, which stands half-finished and abandoned at present, would have drained swamplands, aided agriculture, transportation, power resources, and health, and provided expanded flow to the Nile River all the way down to Egypt. The World Bank and the U.S. State Department are backing a “Middle East Water Summit” in Turkey this November, which is intended to promote only politically favored projects such as desalination plants in Saudi Arabia, and water shortages elsewhere.

London and Washington circles were apoplectic about the opening of the new Libyan water project. The LondonFinancial Times ran criticisms of the project from Angus Henley of the London-based Middle East Economic Digest.The pipeline, he said, was “Qaddafi’s pet project. He wants to be seen as something other than the scourge of the West.” The Financial Times called the project Qaddafi’s “pipedream,” stating that critics may be awed by the engineering involved, “But they regard the dream as a monument to vanity that makes little economic sense in a country where the U.N. Development Program says 94.6% of territory is desert wasteland.”

If it is vanity that motivated the project, at least the vanity of Libya’s head of state is being channeled in a productive direction in this case–which is more than can be said of the leaders of Britain and the United States. 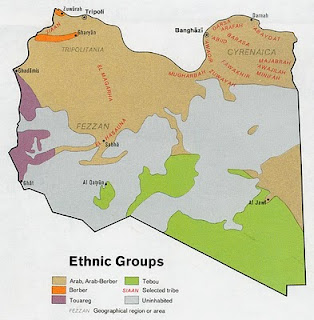 Libya ethnic map from Arthur Zbygniew
Click through for many other maps.
Read More Great Articles from A. Peasant at  twelfthbough.blogspot.com