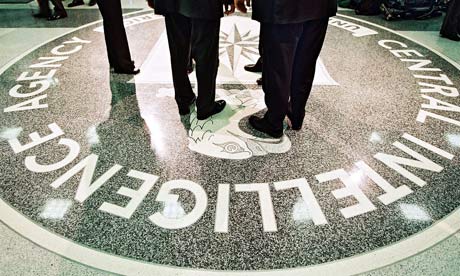 Given the fact that NATO itself was one of the pioneers of false flag terror to frame political enemies under Operation Gladio, a CIA-supported terror campaign that was responsible for a series of bloody attacks in Europe throughout the cold war years, we shouldn’t be surprised if NATO ressurects the legacy of Gladio in its desperation to justify a final decapitation strike to topple Colonel Muammar Gaddafi.

Gaddafi’s threat to attack Europe in retaliation for the NATO bombing campaign in Libya prompted the establishment media to react with contrived outrage, eliciting sharp intakes of breath at the mere thought that Gaddafi, whose country has been under constant bombardment for over three months, would dare to even speak about fighting back.

This is all based on the failure of the media to properly challenge the Obama administration’s ludicrous and Orwellian contention that more than 800 attack missions flown by U.S. warplanes over the last 13 weeks which have targeted Gaddafi’s command centers, not to mention universities, hospitals and apartment blocks, can be justifiably termed “kinetic military action” and does not amount to an act of war.

Of course, the only reason Obama is loathe to admit the fact that the attack on Libya is a war is because it would stymy the billions of dollars the Pentagon has creatively shifted around to fund the bombardment, as well as opening up Obama to impeachment charges for his flagrant violation of the constitution in not seeking Cogressional approval for the campaign, against the advice of his own constitutional lawyers.

But even as the press shrugged its shoulders at the deaths of toddlers slaughtered by NATO “smart bombs” and gave a collective sigh as maimed babies were displayed on television, the establishment reacted to Gaddafi’s threat to take the battle “to Europe, to target your homes, offices, families, which would become legitimate military targets, like you have targeted our homes,” with a hyperbolic and hypocritical rush to seize the moral high ground.

But aside from the fatuously feigned pious righteousness in response to the mere hint that Gaddafi would dare fight back in a war, the Libyan leader’s threat highlights the potential for false flag attacks to be staged in Europe and then blamed on Gaddafi as a justification for a ground invasion that is already in the works.

With NATO powers eager to bring the war to a close within the next two months, there’s a signficant risk that we could see the legacy of Operation Gladio rear its ugly head once again. Gladio was a clandestine NATO cold war “stay behind” operation that sought to create a “strategy of tension” by having its agents carry out terror attacks in Europe which were blamed on leftist political groups.

Gladio was designed to demonize political opposition and “force the public to turn to the state to ask for greater security,” according to the testimony of former Gladio agent Vincenzo Vinciguerra. In 2000, an Italian parliamentary investigation found that the 1980 Bologna train bombing, which killed 85 people, was carried out by “men inside Italian state institutions and … men linked to the structures of United States intelligence.”

“The reason was quite simple. They were supposed to force these people, the Italian public, to turn to the state to ask for greater security. This is the political logic that lies behind all the massacres and the bombings which remain unpunished, because the state cannot convict itself or declare itself responsible for what happened.”

Gaddafi himself is no stranger to being the focus of international condemnation for bloody terror attacks blamed on his government.

Although Libyan government agents working at the behest of Gaddafi were accused of carrying out the bombing of Pan Am Flight 103 in 1988 over Scotland, evidence that emerged both before and after the 2001 trial and conviction of alleged former intelligence office Abdelbaset al-Megrahi strongly indicates that the attack was a false flag event.

“Former Labor MP Tam Dalyell and Edinburgh law professor Robert Black urged the Scottish and UK governments to answer reports there is evidence Abu Nidal, aka Hasan Sabri al-Banna, was a U.S. agent,” the Scotsman reported on October 27, 2008. “They have long believed Abu Nidal, who died in Iraq in 2002, and his Popular Front for the Liberation of Palestine General Command were responsible for co-ordinating the bomb that blew up Pan Am flight 103 over Lockerbie on 21 December, 1988 with the loss of 270 lives.”

“Intelligence reports, said to have been drawn up for Saddam Hussein’s security services, said Kuwaitis had asked Abu Nidal, whose real name was Sabri al-Banna, to find out if al-Qaeda was present in Iraq,” David Maddox wrote for the newspaper. The reports referred to Abu Nidal’s “collusion with both the American and Kuwaiti intelligence apparatuses in co-ordination with Egyptian intelligence.”

MP Dalyell said the reports added weight to the theory that Lockerbie was a “tit-for-tat” attack for the shooting down of an Iranian passenger airliner by the warship USS Vincennes in 1988, and was allowed by the U.S. administration.

He said the claims that Abu Nidal was working for the Americans would explain some of the mysteries that surrounded the Lockerbie outrage. These included a notice that went up at the American embassy in Moscow warning diplomats not to travel on Pan Am flights, and senior South African figures being “hauled off” the plane before its final flight.

Expendable students replaced the diplomats on the doomed flight.

“If the American public had known of a link with Abu Nidal, and had known that the US government knew enough to pull VIPs off the plane and let home-going students take their place, there would have been fury at a time of transition between the presidencies of Ronald Reagan and George Bush Senior,” Dalyell and Black explained.

In May of 2000, a gag order added weight to the theory that Libya was not behind the Lockerbie bombing. Dr. Richard Fuisz, a CIA agent and a potential key trial witness, was gagged by the U.S. government under state secrecy laws and faced 10 years in prison if he revealed any information about the terrorist attack, the Sunday Herald reported. Fuisz, a multi-millionaire businessman and pharmaceutical researcher, was, according to U.S. intelligence sources, the CIA’s key operative in the Syrian capital Damascus during the 1980s where he also had business interests.

“One month before a court order was served on him by the US government gagging him from speaking on the grounds of national security, he spoke to US congressional aide Susan Lindauer, telling her he knew the identities of the Lockerbie bombers and claiming they were not Libyan,” Neil Mackay wrote. “Fuisz’s statements to Lindauer support the claims of the two Libyan accused who are to incriminate a number of terrorist organizations, including the Popular Front for the Liberation of Palestine-General Command, which had strong links to Syria and Iran,” in short Abu Nidal.

Nidal was either killed by the Iraqi secret police for his role as an American double agent or he committed suicide after the Iraqis learned of his betrayal, according to the Independent.

In 2003, it was reported by Gordon Thomas of The American Free Press that Bill Clinton’s close friend — the billionaire fugitive from justice, Marc Rich, who had personal knowledge of the identity of the Israeli spy in the White House known as “Mega” – played a crucial role in helping the Bank of Credit and Commercial International (BCCI) arrange for Nidal to receive “hundreds of millions of dollars for illegal arms transactions in an effort to persuade its wealthy Middle East backers that the bank was staunchly pro-Arab.” This evidence was presented to the Senate Judiciary Committee in January of 2003.

“British weapons secretly destined for Abu Nidal were financed through BCCI offices and shipped under export documents that Marc Rich knew to be phony. My role at the bank was to handle the Nidal account. I later became a spy for the CIA and MI6,” Ghassan Quassem, who was a senior officer with BCCI for nearly two decades, said in a sworn affidavit.

At the foundation of the Lockerbie fiction is the claim that Gaddafi had Pan Am flight 103 blown of the sky as revenge for Reagan’s 1986 bombing of Triopli, allegedly in response to the bombing of a night club in West Berlin that killed one U.S. soldier. Reagan’s illegal attack on October 18, 1985, was at the time the largest air assault since the Vietnam War. 120 aircraft rained destruction on points around the cities of Tripoli and Benghazi. At least 100 civilians were killed, including Gaddafi’s 15-month-old adopted daughter, Hana.

Former Mossad agent Victor Ostrovsky revealed the truth behind the bombing in his 2002 book, By Way of Deception: The Making of a Mossad Officer — it was orchestrated by Israel.

A special communications device, Ostrovsky claims, was planted by naval commandos deep inside Libya by the Mossad. “The device would act as a relay station for misleading transmissions made by the disinformation unit in the Mossad, called LAP, and intended to be received by American and British listening stations,” write Ostrovsky and Claire Hoy. “The listeners would have no doubt they had intercepted a genuine communication” and “the content of the messages, once deciphered, would confirm information from other intelligence sources, namely the Mossad.”

“After the bombing of Libya, our friend Qadhafi is sure to stay out of the picture for some time. Iraq and Saddam Hussein are the next target. We’re starting now to build him up as the big villain. It will take some time, but in the end, there’s no doubt it’ll work,” a Mossad agent told the author.

Ostrovsky’s revelation is another bit of history the corporate media will never tell you as it continues its dutiful service to the ruling elite to manufacture outrage against official enemies.

Gaddafi steadfastly refused to accept responsibility for the Lockerbie bombing for over a decade and made it a condition of Libya’s $2.7 billion payout to the families affected in 2002 that it was “the price of peace” and not an admission of guilt.

The story of how Libyan patsies were framed for the Lockerbie attack should give Gaddafi pause for thought and remind him to be a little more sophisticated in his rhetoric. Should there be a staged event in Europe that gets blamed on Libya, NATO powers will confidently point to Gaddafi’s own public statement as evidence for his culpability.

Lest we forget that NATO has plenty of willing Al-Qaeda terrorists fighting on its side that could be tapped for the role of ressurecting Operation Gladio in order to justify a swift and violent regime change in Libya by staging false flags in Europe which are then blamed on Gaddafi.

The videos below explore some of the evidence surrounding the 1988 Lockerbie bombing.